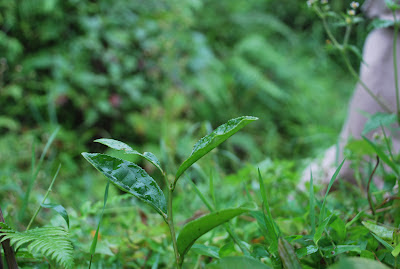 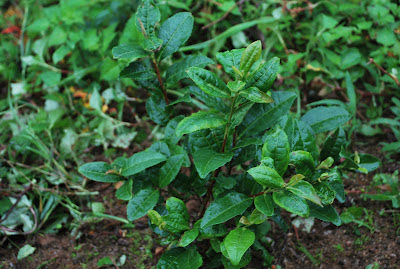 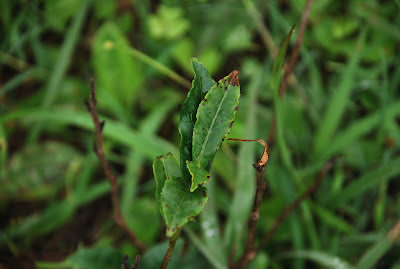 皆様 ありがとうございます。
Posted by Lochan at 15:04 No comments: 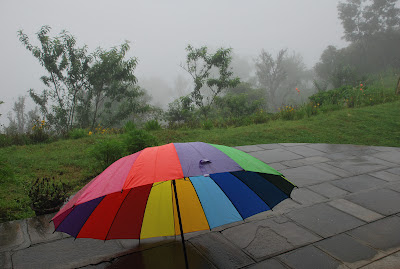 This is one of the most essential tools in a tea garden. (at 1850m) 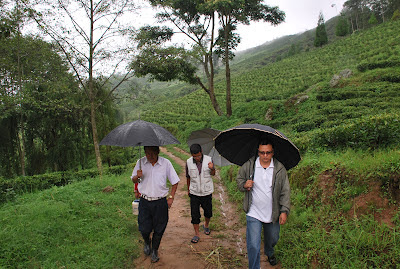 Whether you are a manager or a supervisor going for your rounds. (at 1765m) 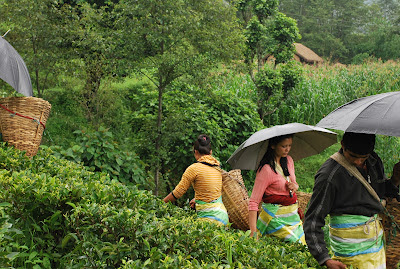 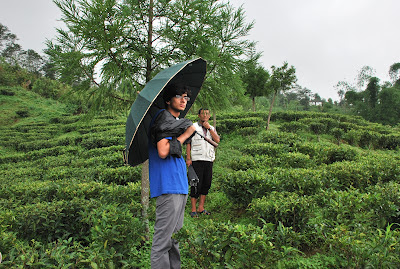 Umbrella is your best friend in a tea garden. To protect you against rain or sunshine and against UV which is quite high at that altitude. Or even against that odd village mutt. 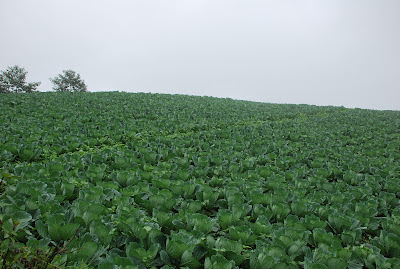 Dhankuta is probably the cabbage capital of Nepal. Many farmers have taken up vegetable farming with cabbage being the main crop. In many cases it is the only crop.

Grown at this altitude, vegetables are delicious. I can vouch for that. However it is always dangerous to be dependent on just one crop. Some farmers have even uprooted old tea bushes to plant cabbage. A real tragedy considering that tea leaf prices have been steadily increasing over the years while vegetable prices are more volatile. 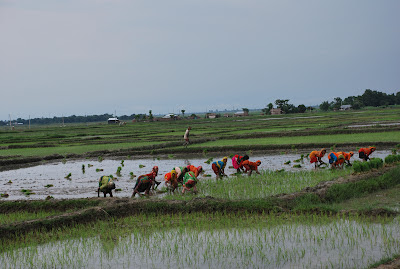 Eleanor Rigby, picks up the rice
In the church where a wedding has been
Lives in a dream
- Beatles

To put rice on our plates, someone has to do the back breaking work of planting. Usually women.  Without them we could not have that comforting bowl of rice every day.  Thank you for the hard work.

Image: Womenfolk planting rice somewhere between Kanchanpur and Bharda. Monsoon 2012.
Posted by Lochan at 15:48 No comments: 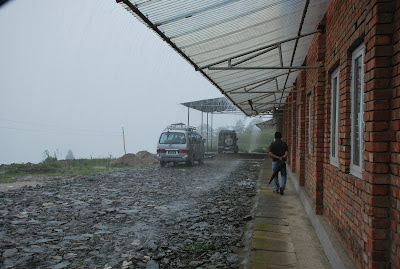 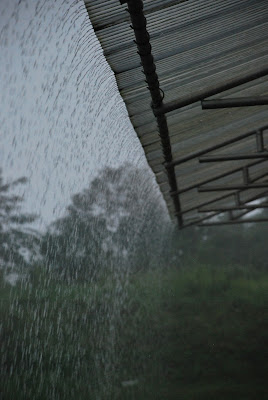 I guess Aitabare in Ilam district gets about 3000 mm of rain per year. Since Darjeeling gets 3124mm per year it should be similar as it is just a short hop from there to Darjeeling. We do not have a weather station at Ilam Chiyabari, Aitabare but it would be interesting to compare Aitabare with Ilam Bazar, Fikkal and Darjeeling. The micro climate in Aitabare seems to be different. While it is mostly shrouded in mist and fog during the monsoon, nearby Fikkal does not. Is it because there are more trees and forest cover and less buildings at Aitabare  than Fikkal?

Fortunately the buildings of Ilam Chiyabari are probably one of the most well constructed in the region and are well designed to cope with the rains in the summer and the cold in the winter.

Image: Monsoon rains vent their fury on Ilam Chiyabari factory at Aitabare. July 2012.
Posted by Lochan at 11:40 No comments: 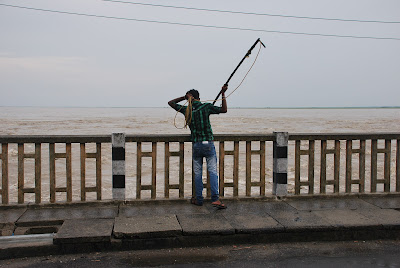 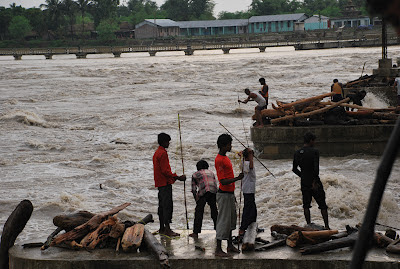 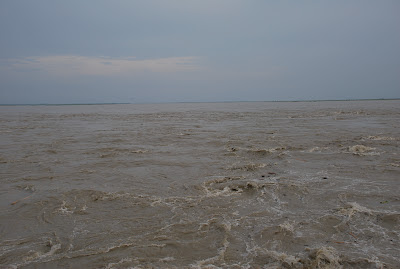 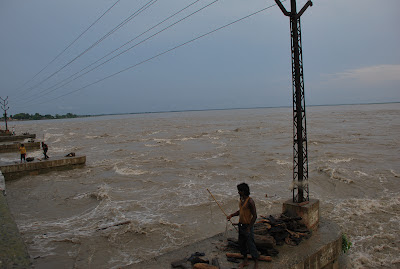 Koshi and its tributaries drains about 29,000 square km in China and 31,000 square km in Nepal before heading into India to join the Ganga. Within its basin are six 8,000 metres mountains including Sagarmatha, the world's highest peak.

Along with massive quantities of silt (It has one of the highest silt loads in the world) it carries lots of driftwood. Despite the raging monsoon waters these people precariously fish for the valuable wood using long spears. One slip and it is curtains. 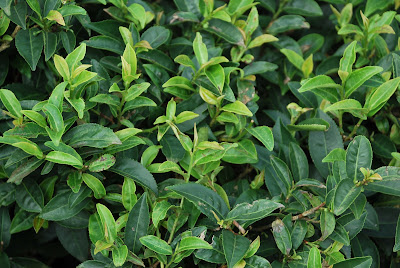 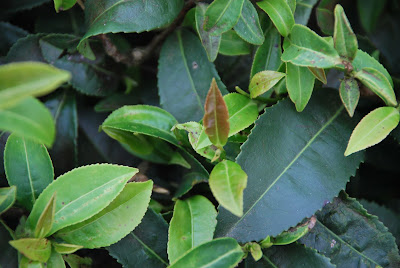 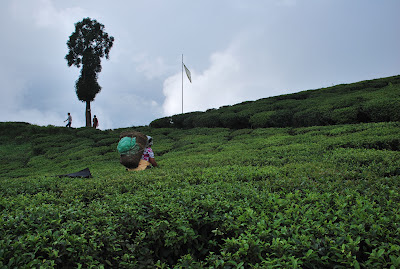 The original tea bushes from the seeds gifted from China. Just a few days ago I was told by a former tea planter in Darjeeling that this garden just above Ilam Bazar and Bannockburn in Darjeeling was planted on the same day. 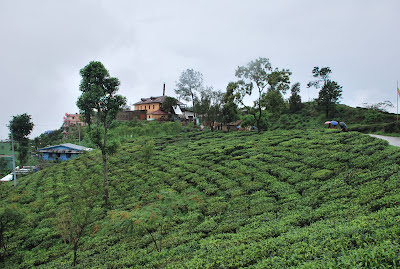 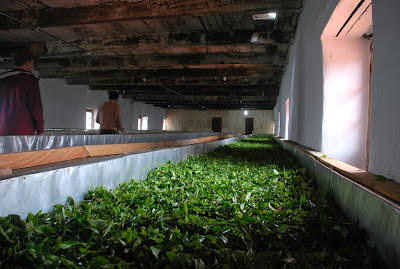 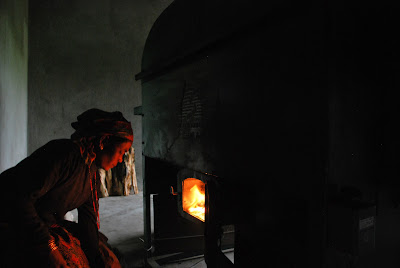 Don't know that I will
But until I can find me
A girl who'll stay
And won't play games behind me
I'll be what I am
A solitary man
Solitary man
- Neil Diamond in Solitary Man
In 1878, one year after the passing away of Prime Minister Jung Bahadur Rana to whom those precious tea seeds had been gifted by the Chinese Emperor, the first tea factory was established in Ilam at the Ilam Tea Estate.

This factory was the the first modern factory in any industry in Nepal pre-dating even the Biratnagar Jute Mills and Juddha Match factory in the low-lands. So the modern industrial movement in Nepal began with tea plantations and a solitary tea factory in Ilam.

Till the early 1950's Nepal was a closed country much like Japan during the Edo period / Edo Jidai 江戸時代。 Nepal's tea industry was greatly and negatively affected by this. Unlike its counterpart across the border in Darjeeling, which thrived under the British colonial rule, Nepal was deprived of an access to the world markets and there was very little domestic tea consumption leading to no growth in tea industry for the next 100 years.

Like a solitary man this tiny tea factory was the only representative of the tea industry in Nepal for almost next 100 years. 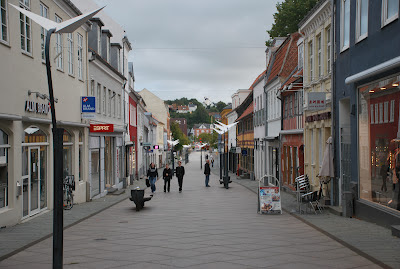 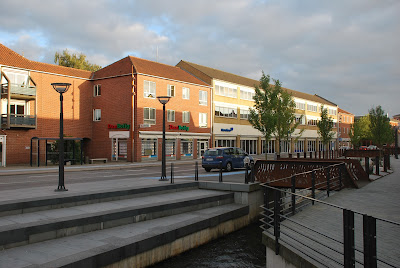 For someone from this part of the world, there is usually no reason to visit Vejle on the Jutland peninsula of Denmark. However some years ago I had to go there to meet an important customer. Before that I had not even heard of the place even though in the 19th and up to the mid 20th century it was an industrial city and also known as the Manchester of Denmark.

A few months later at home while having breakfast I picked up the bottle of jam, the contents of which I had just put on my toast. To my surprise and delight the jam was from Vejle, Denmark. Suddenly it was more delicious.

It is wonderful what travel does to you.