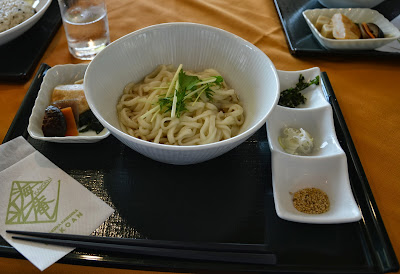 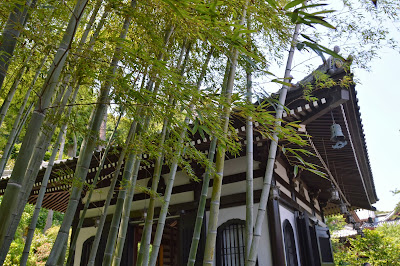 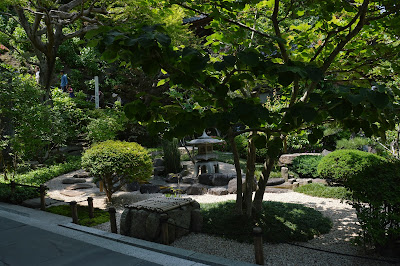 One does not associate vegetarian fare with Japan. Yet, should you have meal in a temple complex that is what you will get: simple and delicious vegetarian food surrounded by gardens that are hundreds of years old or even a thousand years plus.

On a warm spring day at Hasedera Temple 長谷寺 in Kamakura 鎌倉 that was my fare. Perhaps it was the first time that I had had something to eat in a temple in Japan. Hasedera is one of the great temples of Kamakura and houses the famous wooden statue of Kannon and is part of the pilgrimage circuit to Goddess Benzaiten.

Kannon of Japan is known as Guanyin in China and Avalokitesvara in Nepal, all in the Buddhist tradition. But here is the thing, svara in the name Avalokitesvara shows a strong connection to the Hindu tradition of Shiva.

One of my favourite teas is Tieguanin 鐵觀音 originating from Anxi 安溪縣 in Fujian province  福建 of China. That tea is named after Guanyin or Kannon or Avalokitesvara. Depending on the processing this tea is either flowery with a delicate aroma. Or if it has been roasted, it will have a strong nutty taste.

So it was entirely appropriate that I should be having a simple vegetarian lunch at a temple dedicated to Kannon / Guanyin to whom Tieguanin tea is dedicated in the tradition established by the person who grew up around my ancestral village in Lumbini, Nepal more than 2500 years ago.

Image: Vegetarian food at the restaurant in Hasedera Temple complex and the surrounding garden. (May 2013)
Posted by Lochan at 17:38 2 comments: 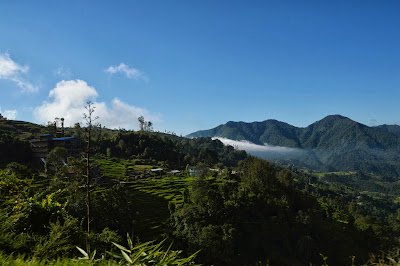 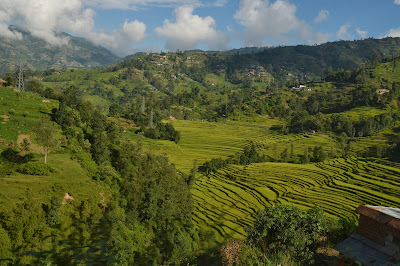 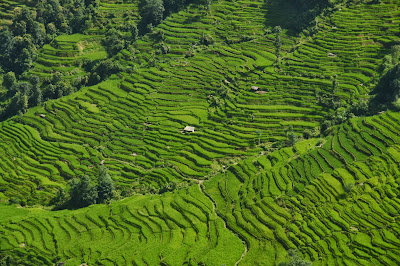 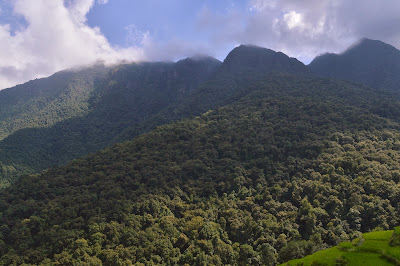 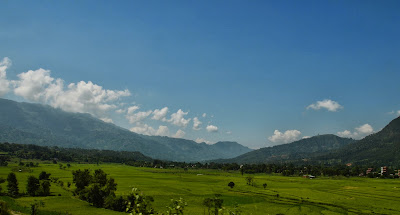 Just a short distance from Kathmandu is Trisuli. The place takes its name from Trisuli River which flows in a south west direction to meet Kali Gandaki to become Narayani in Chitwan.

As a tea person Trisuli touches me through history. It was here at Trisuli at Betrawati, that The Treaty of Betrawati was signed by China and Nepal during the Qing 清朝 period (1644-1912).

The Treaty of Betrawati ended the Sino Nepali wars (1788-1792). These wars are considered to be one of the Ten Great Campaigns of Qianlong Emperor 乾隆帝 (reign 1735 -1796). The upshot of the treaty was that about 70 years later in 1861 tea seeds from China, gifted by the Emperor of China, possibly Emperor Xianfeng 咸豐帝,  to Nepal literally seeded the tea industry in Nepal.

That is not to say that the terraced rice fields ever go away. Those terraces can make one emotional if one cherishes the centuries of toil of Nepalis: a metaphor of the hard work of our forebears to keep this country united and independent. Some of the terraces extend vertically perhaps 300 metres or more and all the way down to the Trisuli valley.

Again on the valley floor one is met by the green rice fields reminiscent of the Kathmandu valley of yesteryear. The future of this emerald valley, hopefully will be better. Perhaps its connection to tea in Nepal will ensure that!

Images: (24 September 2013)
Top - Looking back to the hills of Kathmandu Valley with the clouds overflowing onto the next valley.
Second from Top - Rice fields well before Kakani
Middle & Second from Bottom - Rice terraces and dense (mostly Chestnut) forest cover after Ranipauwa
Bottom - Bidur ko phat - the valley floor at Trisuli
Posted by Lochan at 15:39 6 comments: 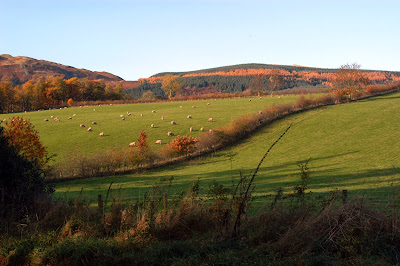 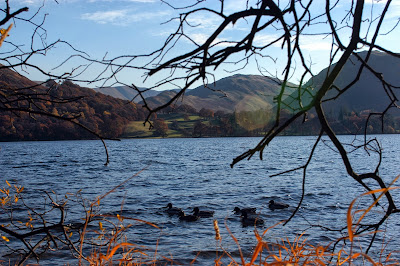 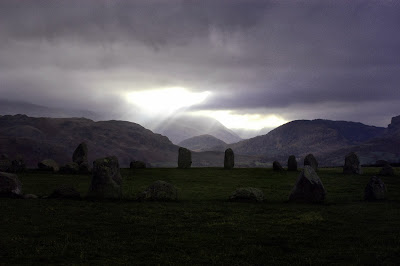 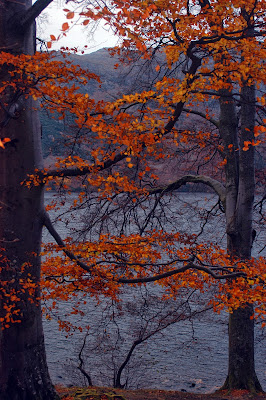 
While there is no bridge over these waters, surely one cannot but be moved by these stunning images of the Lake Districts UK in the autumn of 2003 captured by my brother, Bachan. One feels small. And the tears are perhaps tinged with a bit of autumnal bitter sweet melancholy to see nature at its best knowing fully that soon this beauty will give way to cold howling winds from the north. 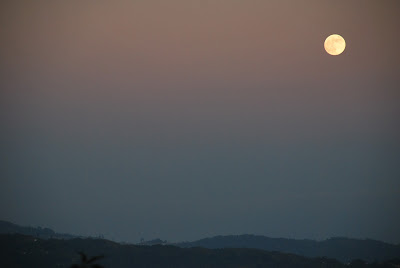 The bright moonlight
in front of the bed
appears like frost
on the ground I look up
at the Autumn moon, and
lowering my head
I think of home.


It is now Mid Autumn Festival 中秋節. A time when people gaze at the moon, eat mooncakes and drink tea. It is a time of reunion and gathering of both family and crops. A time of thanksgiving for the harvest.

I like this Chinese festival for several reasons. Firstly our tea garden name is Jun Chiyabari and in Nepali Jun means moon or moonlight. So there is immediate connection. Then the other connection is with drinking tea and eating mooncakes. As a person involved with tea, what more can I say about drinking tea? Finally, last but not the least, I love autumn. Always have. I can't ask for more than a festival at the beginning of autumn with all its layers! 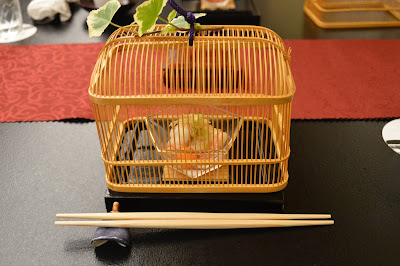 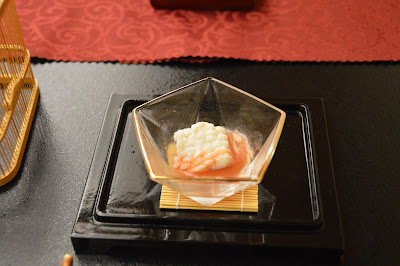 A far croonin' is pullin' me away
As take I wi' my cromack to the road.
The far Coolins are puttin' love on me
As step I wi' the sunlight for my load.

- "The Road to the Isles" - The famous traditional song from Scotland.

A firefly in a bamboo cage is brought to my table. The cage is lifted. Lo and behold! The firefly turns into the most delectable morsel of what Italians call Frutti di Mare. With the help of chopsticks it goes slowly into my mouth and I am transported into seventh heaven. Although a part of me wishes to have just admired this beautiful creation, cage and all for hours. 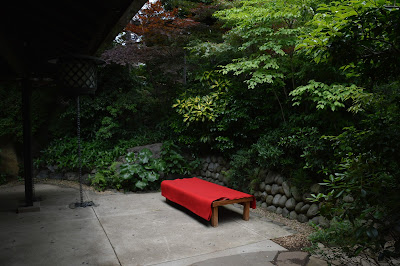 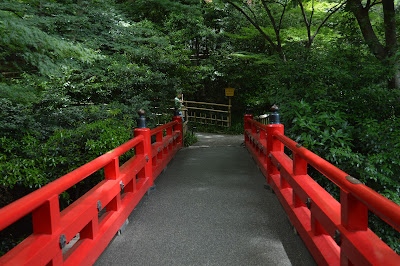 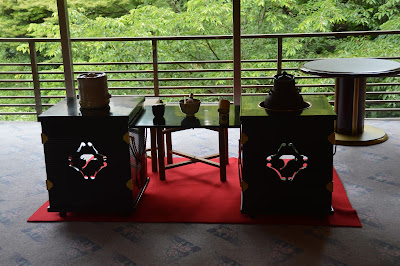 For you,
I went out to the fields
to pick the first spring greens-
all the while on my sleeves
a light snow falling.
- Emperor Kōkō 光孝天皇 Kōkō-tennō (830 – August 26, 887) the 58th Emperor of Japan. From The Ogura Hyakunin Isshu 小倉百人一首.


In Nepal red is an auspicious colour. It is a the colour of life and vibrancy. Brides wear red when they get married and not the white like in the western tradition where it symbolises purity. We put red tika on our foreheads as a blessing. And women wear red during Teej festival rejoicing the joy of life. Yes, red is definitely my colour of choice.

In Japan I have seen red being used in a different way than I am used to. More sparingly and with that typical finesse that is so natural in Japanese culture. A bench with red blanket set in a sea of green. Red bridges over babbling brooks are more common, but I do not know why they are coloured so. Or a red mat under the zen-black of a tea ceremony set. I could go on and on. Nuanced use of red creates a dramatic effect. One is drawn not so much to the red per se but to the totality of the scene. That splash of red serves to focus the visual sensation of the looker but actually accentuates the scene.

I went into a dark forest of green and found splashes of red. Perhaps that is the light snow falling on me. I am thankful for that red snow.