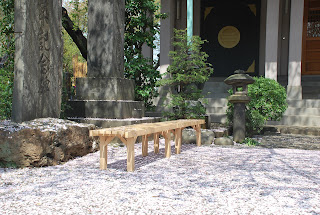 How we have overslept the spring morning!
Here, there, everywhere, birds
are heard twittering.

After a long night's clamour
of wind and rain, how many petals
have fallen to the ground?


Image: Fallen petals of delicate pink sakura blankets the ground of a shrine at Nishi Nippori, Tokyo. April 2012.
Posted by Lochan at 15:00 2 comments: 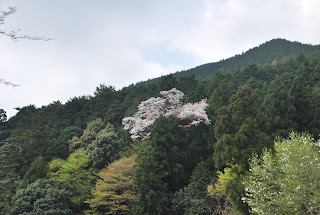 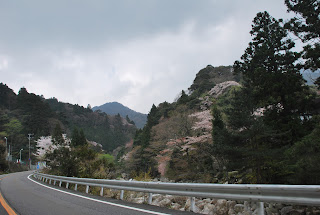 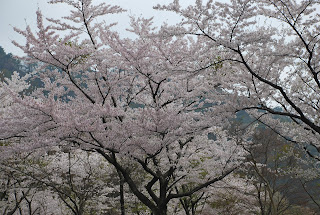 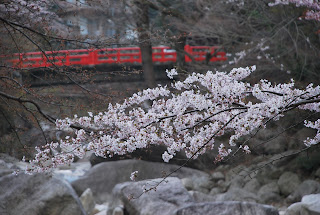 When I reached Nagoya in mid April the sakura blossoms viewing season was already over. Probably sensing my disappointment, Hotta san took me to Yunoyama Onsen (湯の山温泉) for hanami in his car, the most famous Honda Beat in Aichi. From Nagoya it is about an hour's drive in Mie prefecture. Behind the wheel of that Beat he drives like Michael Schumacher so we managed to reach it in less than an hour. Much less.

Yunoyama-onsen in Suzuka Kokutei Park has been a spa resort since the 8th century. It is located at an altitude of 300 - 320 meters at the base of Gozaisho-Dake (1210 m) along the Mitaki-gawa River.
As one climbed the hills one glimpsed an odd sukura in full bloom amongst a sea of green. As we climbed higher and higher more and more came into view. It was wonderful and pleasing to the eye and a salve to the soul. These images do not do justice to the beauty of the place. Hotta san, いつもありがとうございます。


Images: The first sakura comes into view as one climbs towards Yunoyama. Then more and more untill the hillside is covered with them. April 2012
Posted by Lochan at 10:33 1 comment: 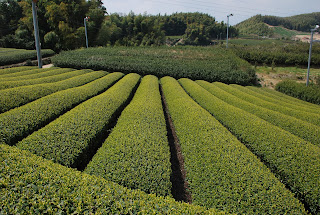 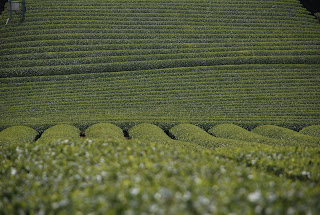 During the Edo period Yokkaichi-juku (四日市宿 ) was the forty-third station of the Tokaido and is located in the city of Yokkaichi, Mie Prefecture (三重県), Japan.

Yokkaichi is also known for its tea. I understand that apart from Mariko in Shizuoka, some of the first Assam seeds brought to Japan by Tada Motokichi were also propagated in Mie prefecture in Yokkaichi area. However my knowledge on this is limited and I could be entirely wrong. Someone may have to confirm this.

Yamanaka san who is a friend of my friend Hotta san of Aichi was gracious to receive us and show me his organic tea farm and share his tea knowledge with me. Whether you live in a ultra modern, super developed country like Japan or a struggling backward and primitive one like Nepal, it seems to me that we all have the same issues! 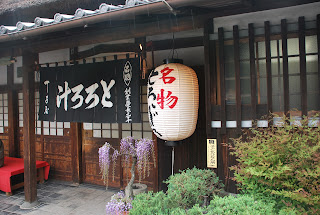 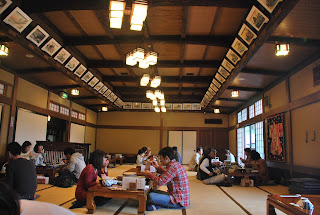 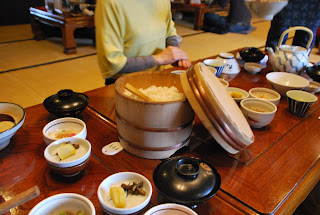 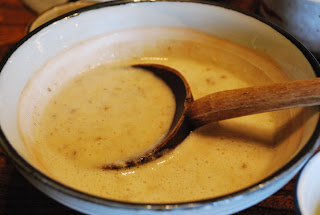 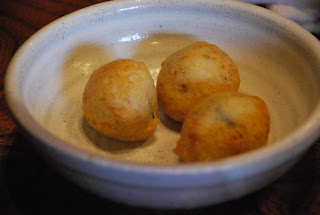 Mariko-juku (鞠子宿 ) in Shizuoka is the twentieth of the fifty-three stations of the Tōkaidō route that extended from present day Tokyo's Nihombashi to Kyoto's Sanjo Ohashi during the Edo period. At each station travellers had to present their permits to government post stations if they wanted to cross that station. Each station also had rest areas for weary travellers.

At present day Mariko modern and hungry travellers can partake in great wholesome food at Chojiya (丁字屋 鞠子) which is well known for Tororojiru or grated yam soup. This restaurant is only 416 years old having been established in 1596. After the Battle of Sekigahara it really took off because of new system and regulations established by the new shogun, Tokugawa Ieyasu. Yams are the speciality of this rest house and the images are part of the Honjin set menu consisting of among other things, Tororojiru, rice and deep fried grated yam with tofu.

Image from top to bottom: Chojiya main entrance; seating area; part of the Honjin set menu; Tororojiru; and deep fried yam and tofu. April 2012.
Posted by Lochan at 17:33 No comments:

In a country where people live the longest in the world it is no surprise that that country should have some of the oldest companies in the world. There are thousands of companies in Japan that are more than hundred years old. Some are even more than thousand years old. What is their secret? I have no clue but perhaps being in a stable industry is one aspect. Maybe not getting carried away by irrational exuberance and flavour of the month but evolving slowly as required is another. 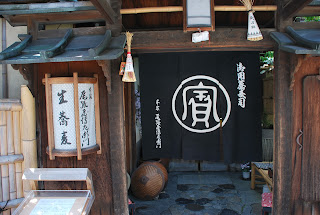 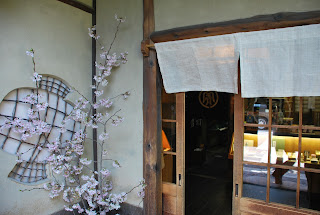 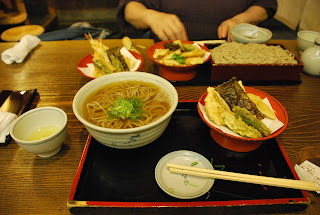 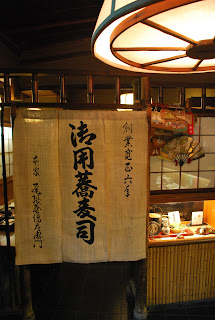 And the food? Delicious soba with season's first bamboo shoots. And some famous tea from Kyoto of course! Amazingly simple but exquisitely delicious. You can't go wrong after having had 547 years or more to perfect your skills!

Images: Outside entrance to Owariya at 322 Kurumaya Cho, Nijo, Kyoto (top) The inner entrance (middle). Inside and the simple soba noodles that it is famous for.
Posted by Lochan at 18:20 1 comment: 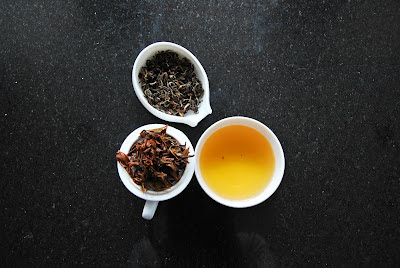 A drizzling rain falls like tears on Qing Ming;The mourner's heart is breaking on his way.Where can a tavern be found to drown his sadness? A cowherd points to Xing Hua (Apricot Blossoms) Village.Du Mu 杜牧 (803–852) of Tang

Today is Qingming festival 清明節. The Chinese Qingming Festival or Chingming festival usually falls 104 days after winter equinox. On this solemn festival day families visit ancestral graves, and tombs to sweep and clean them and generally remember them. The festival itself is said to have started during the Spring Autumn Period (771-476 BCE).
On the other hand it is also a day that all tea lovers all over the world look forward to. Pre-Qingming plucked teas are prized and exorbitant prices are demanded for such teas. Accordingly this festival is of great significance to all of us involved in tea.

Du Mu's poem alludes to rain on Qingming festival. It generally rains on this day. I don't know if it rained in various places where they observe this festival, but it certainly rained here.

On this solemn yet wonderful day, I shall be drinking some exquisite tea such as the one in the image above and reflecting on teas, particularly this year's teas and praying to the Gods and ancestors for a successful 2012. 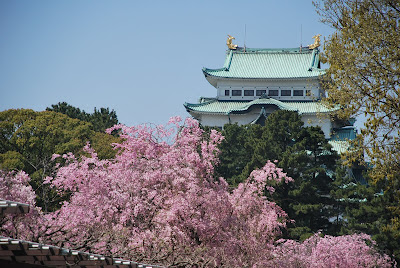 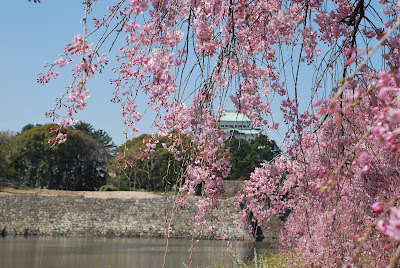 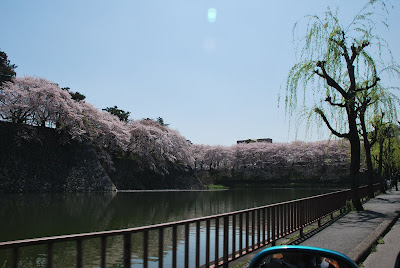 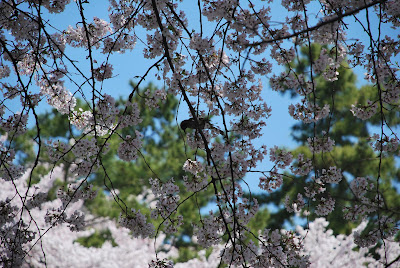 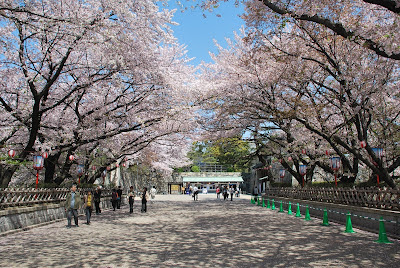 Hanami is spectacular around Nagoya castle. I wonder how it is this year. I am envious of those who will or who have already enjoyed this ephemeral beauty this year.

It is said that Hanami or blossoms viewing particularly plum and cherry blossoms started during the Nara period (710–794) when viewing plum blossoms was more popular. Subsequently from Heian period, as mentioned in the novel, Tale of Genji, Hanami almost exclusively refers to viewing cherry blossoms or sakura.

April Come She Will 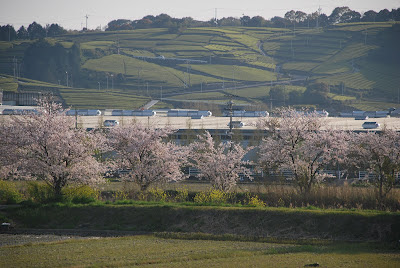 April come she willWhen streams are ripe and swelled with rain;May, she will stay,Resting in my arms again -April Come She Will by Simon & Garfunkel. Album: Sounds of Silence released in January 1966

I do not know the meaning of the lyrics of that song by Simon and Garfunkel. However, I do know that April always means the wonderful flowering of cherry blossoms in Japan and equally splendid spring teas in the Himalaya.

Image: Sakura in full bloom in the foreground and tea bushes in the background somewhere in Shizuoka 静岡県, Japan. This place is possibly near Kakegawa 掛川市 but I am not sure. Maybe someone in Japan can tell me.