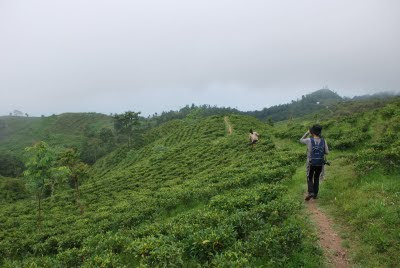 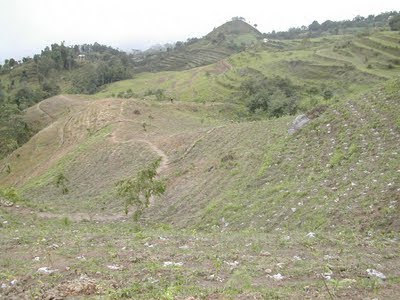 Jun Chiyabari's tea garden in Ramche area. After 10 years of hard labour it is nice to see a barren and abandoned farm land become so green and productive. Of course it is nice to see the that tea plants have grown too, even though rather slowly. Top picture was taken in June 2011. The same area in a photograph from July 2002.
Posted by Lochan at 17:13 2 comments: 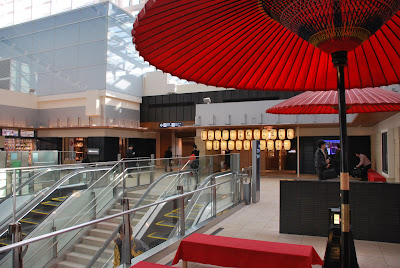 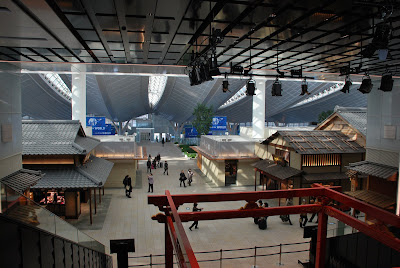 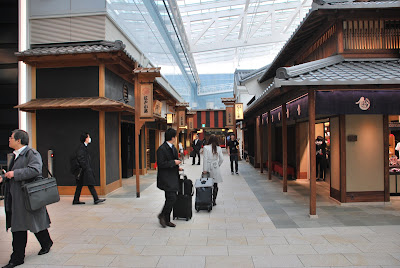 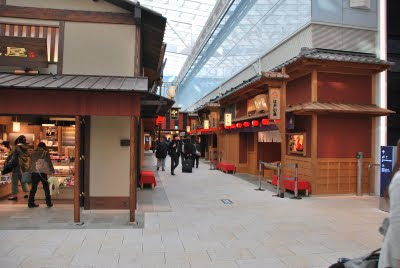 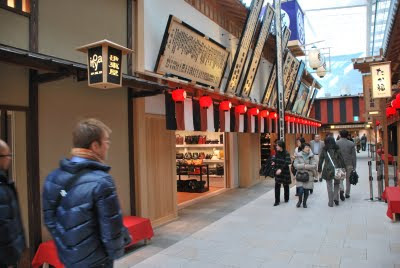 Edo is the former name of Tokyo. In the early 1700's it was already the biggest city in the world. At the Haneda International Airport in Tokyo one can experience the charm of Edo in a floor modeled after a typical Edo period street.
Edo period or Edo Jidai 江戸時代 lasted from 24 March 1603 till 03 May 1868 and was a period of high culture with emphasis on refined workmanship: an epoch when urban population had leisure time and the wealth to support culture. Bushido code of conduct, Kabuki theater, Haiku poetry and Ukiyo-e art flourished amongst others. Western artists like Degas and van Gogh were influenced by Ukiyo-e, the precursor to the modern manga comics.
Posted by Lochan at 08:51 No comments: 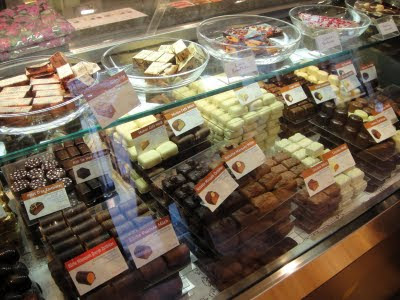 One of the joys of travelling in a country like Germany is the stunning varieties of delicious chocolates and pastries. Image from a chocolate display counter in shop specialised in selling tea.
Posted by Lochan at 11:50 No comments: 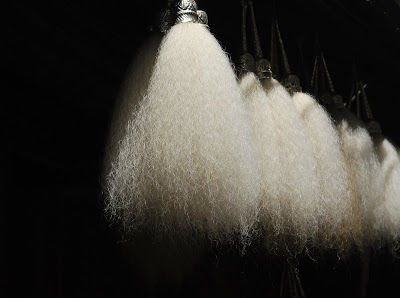 Yak's tails such as these displayed in Vishwanath Gulli (gulli is a narrow street) in Varanasi are often used in temples and monasteries. I have come across such tails in the local market near our tea garden in Hile.
Posted by Lochan at 13:29 No comments: 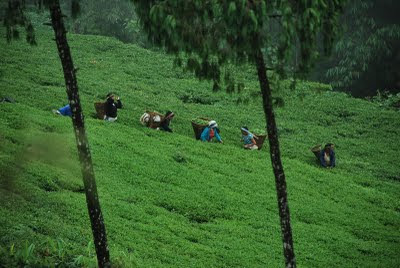 Monsoon is just around the corner. Once it hits the hills everything turns green and soothing to the eyes. I love the life sustaining monsoon rains. This picture was taken in Ilam, Nepal.
Posted by Lochan at 13:19 No comments: 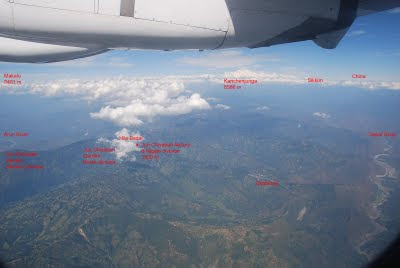 Some years ago flying from Bhadrapur in east Nepal to Kathmandu I managed to get a clear view of two 8000 meters peaks, Kanchenjunga and Makalu; two rivers Arun and Tamur and Dhankuta town with Jun Chiyabari tea garden above it.

In the middle of this picture is Jun Chiyabari at 1850 meters.

I have put labels so that it is easy to see which is where. Just click on the image!
Posted by Lochan at 10:16 2 comments: 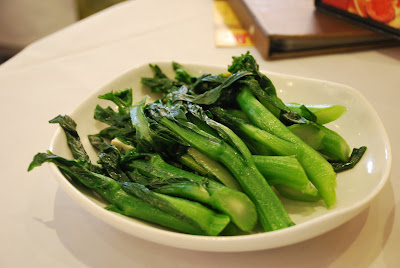 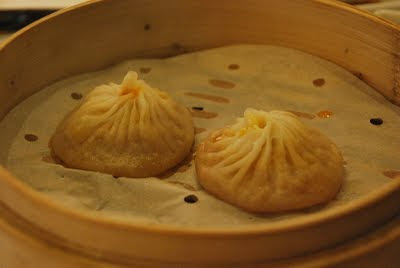 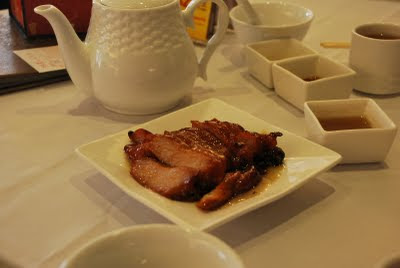 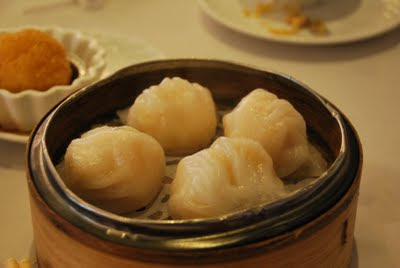 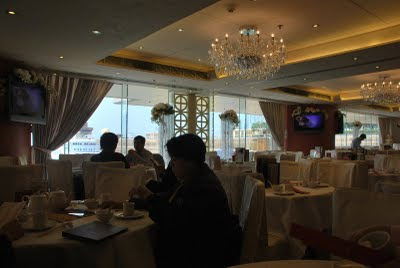 Yum Cha (飲茶) is a Cantonese word meaning "drink tea". It involves drinking Chinese tea and eating dim sum ((點心). Some of the Yum Cha restaurants in Hong Kong are huge and invariably full of people. So arriving really early is an advantage as can be seen in the bottom picture.
Dim sum is just a wide range of small dishes. Yum cha is the entire dining experience. Perhaps the most famous dish is the Har Gau (蝦餃) or the shrimp dumpling (second last image). Yum Cha or "Drink Tea" but also eat a lot! A must do thing in Hong Kong but advise you to go with a local resident.
Posted by Lochan at 10:51 3 comments:

Hitting in the Dark 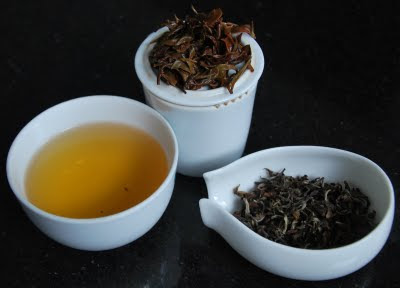 Sometimes I don't know why a tea picks up a particular character. Take this tea for example. It has this unique lychee like flavour. In 2010 we made extremely limited quantities of it. It was a great hit specially in Japan. It also got rave reviews in USA and some European countries. Despite our buyer screaming for more, we were unable to reproduce it again mainly because we didn't know what gave it that unique character. Again in 2011 we made some, but more by accident than design. We still don't know how and why!
Posted by Lochan at 11:54 No comments: 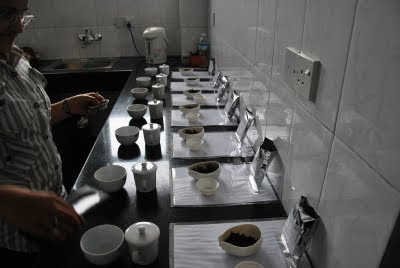 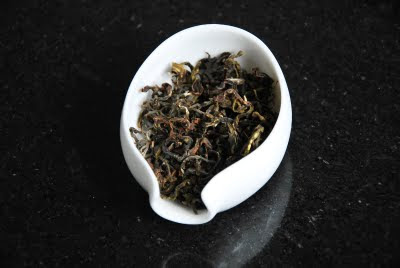 A young trainee prepares teas for tasting at our headquarters. For tea tasting, we finally started using this special ceramic bowl to hold the dry teas leaves instead of laying them out on plain sheets of paper as is done in Darjeeling.

We imported this concept from Japan after observing our Japanese friends. What is this ceramic bowl called in Chinese or Japanese? My Taiwanese friend who sourced it for me calls it Tea Lotus. I wonder what it is actually called in the tea industry. It is a long, long journey before we even begin to understand the tea culture of East Asia, let alone catch up.
Posted by Lochan at 09:51 1 comment: